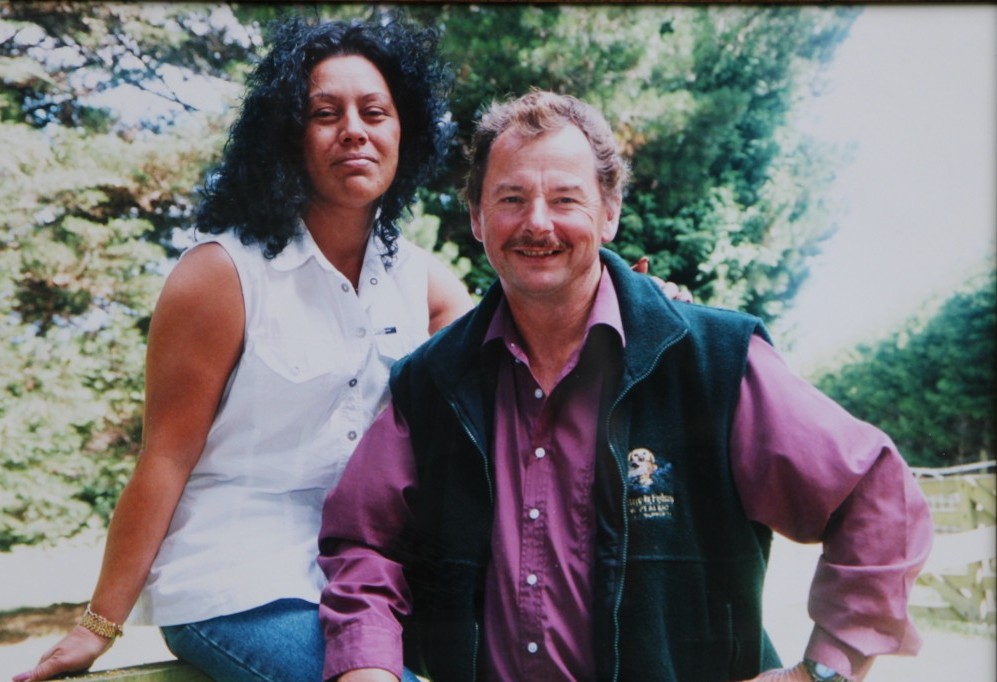 Welcome to the home of Taumata Rottweilers. Our kennel is located in the city of Invercargill which is in the beautiful South Island of New Zealand and is owned by Bill Patterson and Wiki Te Tau. Bill is employed as   a youth development program manager, and Wiki is a secondary school teacher.

Bill has owned working dogs since the age of fourteen, and at sixteen he had his own hunting pack. He went on to become a professional hunter with an outstanding pack of hunting dogs. After returning home from the armed services he acquired his first Rottweiler. It was at this point that he became involved in obedience and it was through this aspect of the dog world that he also became involved in dog sports. He is the only person to date that has obtained the title of NZ Obedience Champion with two Rottweilers. He has also trained and competed with his dogs and has obtained many working qualifications of SchutzHund and IPO, Including SchHIII.

Wiki became involved when she made the decision to purchase her first Rottweiler in the early 1980s. She began competing in the conformation arena and within four years became involved in Dogsport. Although her first bitch did not obtain her SchHI qualification she was successful in being awarded her BH qualification. This bitch was also competitive in Obedience trials.

Her next bitch was also very competitive in the obedience ring and she was awarded her CDX (Highest score), BH and Test A qualification and competed in schutzhund trials, she also went on to be awarded her Championship title in the conformation ring.

Although Wiki is not currently trialing any dogs she shows our dogs and has taken many to multi V. and in show awards, as well as ensuring that each of our dogs maintains a healthy condition by producing and feeding a diet that closely mimics as much as possible their evolutionary diet.

Our goal is to breed beautiful and stable Rottweilers with good nerves and excellent working drives. These Rottweilers are as comfortable on the training ground as they are as home companions. As you will see from our dogs pedigrees we have sourced our dogs from some of the best dogs available. Although breeding, showing and working our dogs is our hobby we have imported many dogs over the years that have helped us win on the sports field as well as in the conformation ring.

We have available to us some beautiful bitches that we will be breeding from in 2019. Including  imported females from Europe and Australia.  Each bitch will be matched to a stud that is strong in an area that we believe will improve any weak points in our program. This will include semen from some of the best dogs from around the world.  We keep a close watch on the genetics of our breeding program and we try not to mate dogs that are closely related in the last six generations.  This will ensure we keep a low line breeding co-efficient and helps to improve health and vigour within our program. 2019 will be a big year for us, as we have purchased a new dog from Germany: V rated Danilo vom Kummelsee. This year 2019  we  hope to again visit Europe to look at stud dogs and other breeding females. A highlight for Bill last visit was competing in the ADRK World show in Serbia with our new dog Brando Pop Rott. In the Open class with an entry of 27 Brando was graded V10, and three weeks later went V2 in the Open class in a specialist show in Croatia. For 2019 we have lined up some excellent stud dogs from Europe to put to our Females.

We go to great lengths to provide our clients with the best puppy that is suitable for their home environment.  We ensure that we match the needs of the new owner, so if you require a home companion, show or sport dog there will be a puppy that suits your requirements

We have a modern kennel facility which includes a whelping complex and puppy pen. Our dogs live on a six acre farm which includes facilities for advanced training. We also offer temperament assessment and training programs for all breeds of dogs that have behavioural issues.